Was the Bible written to oppress woman? 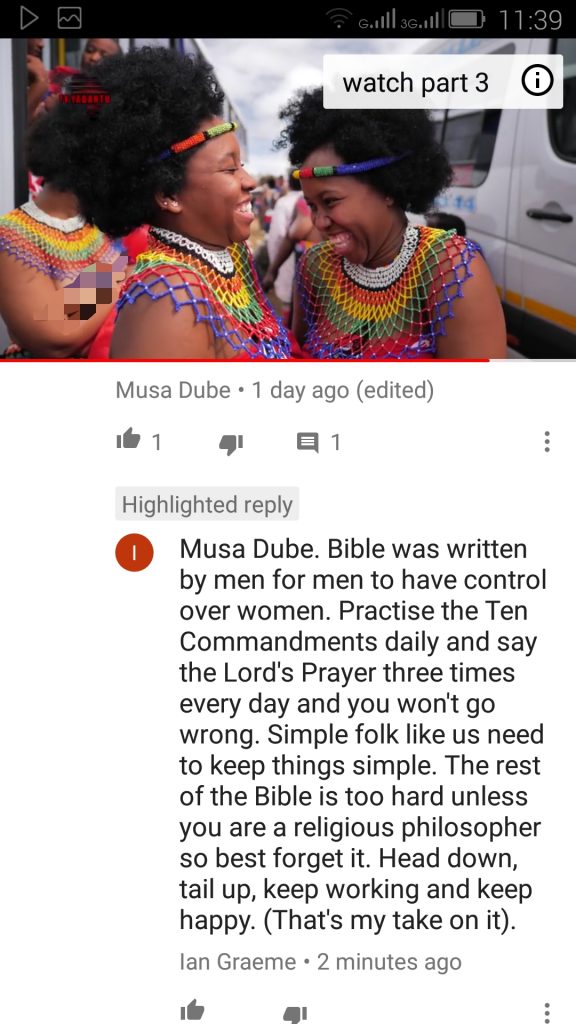 Women are no less of people than man according to the Bible but God has commandments for each. In our time, it is easy for some people to believe that the Bible was written by people to oppress women. I received this response when I passed a comment on a youtube video by Yabantu.tv where I reminded the author that woman should be modest in their dress code. The image on the side is a screen capture of the response from the author of the video.

Yabantu is largely characterized by half necked women that justify their outfit by culture. The mostly exposed parts of their body are breasts. A modestly dressed woman should not expose her breasts at any rate except in privacy, whenever there is a compelling need or to her husband but never in public. An example of a compelling need is a medical checkup or something related. Now that we have been enlightened on what God wants from us, we should comply even when it means banishing some of our cultural practices.

What the Bible was written for

I want to first address the question with a direct response in the Bible. 2 Timothy 3:16 – 17 tells us that scripture is useful for teaching, rebuking, correcting and training in righteousness. This is for men to be thoroughly equipped for every good work. It was written to ensure that the person that studies it is in right standing with God. Jesus Himself referenced scriptures when teaching and fulfilling His ministry on earth.

Never was the Bible written to make money from its sales, to increase in knowledge, to teach other people or even oppress others. What makes people think the Bible is not practical in they read it while giving room for their opinion and reasoning. What they forget is that God is supreme and whatever we say will not change who He is.

Whatever God says in the Bible is as is and it is man’s duty to adjust and comply with what He says. Sadly, He has proven that He can and has done it before to destroy the entire world but save only those that were willing to comply to His standards. It is true that God can wipe out every living person if all of them do not obey Him. He cannot reduce His standard of holiness for any person.

If we consider the life of Noah, the Bible tells us that difficult as it may have been, Noah drove all existing species of animals into the Ark in just 7 days. In Genesis 6:22, the Bible says that Noah did everything according to what God had commanded. God then saved him and his household for obeying His commandments.

The way  of victory

Everyone will face God one day, even those that deny Him and accuse Him of having made the way to life so very narrow. The good news is that it is possible to completely please God while living in this world but this is only possible through His help. He however has made it possible for us to receive the kingdom yet He is a consuming fire (Hebrews 12:28 – 29).

Tagged Bible and woman, tabantu tv and Christianity, tradition and the Bible, why was the Bible written. Bookmark the permalink.