What Illegal migrants that cross the Mediterranean should know 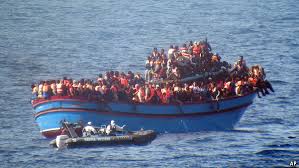 Immigrants are innumerable; some are legal while others are illegal. The purpose of this post is to alert the illegal immigrants of God’s position on their act. There are many reasons why people decide to move from one country to the other. These reasons could justify the move in earthly terms but if it is illegal, God will never tolerate such a decision.

I want to give a quick consideration to the person that contemplates moving into another country illegally, whether it is crossing the Mediterranean or any other border or territory. Such people may not be frequent internet users but they are most likely to search for the truth as they plan to take such a move. I therefore have decided to be a mouth piece for God in this regard.

God is just, meaning He will deal with you justly. God is the final judge for all souls that lives today and all that ever lived. If you are on His side while you live in this world, you are better off in the world to come. God who cannot lie nor show favour to any man will justly judge every man according to His deeds while in the flesh.

God has called for every man to live by the rules of the land. If you wilfully break any of them, you become a sinner and you become liable for a JUST judgement from God. God will damn all sinners to eternal hell. Later I will suggest solutions that God approves for people to be safe from His wrath upon those that are not on His side ().

If you happen to die in the process, you are instantly damned into hell fire. For eternity you will lament your decision that is against the law of the land and you will then see that God’s Word never changes.

Why me saying this?

You may think that it’s easy for me to write this post and blame or condemn illegal immigrants but it is not. I am also faced with so many laws of the land that I have to keep. I don’t differ in any way from the judgement of God if I fail to keep it. If for example I operate a business without having registered it, I’m as good as the person that crosses the Mediterranean as an illegal immigrant. I’m also not going to escape the same judgement of God they shall go through.

One time I wrote an article on the destination of Christians that do not pay taxes, disobedient Christians and the reality that God will not tolerate any sin.

I say these are suggested solutions because as a Christian, I’m not allowed to force people into taking decisions but I have to suggest. If I would have it my way, I would force all illegal immigrants to take one of the two ways suggested below:

If you happen to read this article before you migrate, consider God first and give Him a chance to come into your situation and be a solution. Now that you know, you have no excuse if you happen to die in the wrong path of not following or keeping laws of the land.