The smallest of sin leads to hell 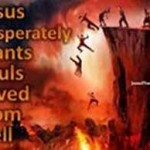 Hell is a place prepared for the devil and demons but people that sin will go there too. I today feel the need to emphasize that sin is what will cause people go to hell, even the smallest of sins. Many think that some sins are ignorable to God and He wont consider them for the soul that died commiting such small sin.

The truth of sins being equal in the sight of God has been shared countless times online. sermons and testimonies are shared daily covering the subject on sin being the same whether small or big. Its a challenge I have taken upon myself to do a daily introspections on the smallest of sins that I could be ignoring and taking for granted.

What then would make you listen when the Lord Jesus Christ has sent so many messengers to relay the same message, ‘sin is the same before God’. There is no way God will compromise His standard for anybody’s comfort.

1. Not committing owns business activities to God – The Voice of the LORD continues to speak to the world today, “Everyone who wants to be a disciple must count the cost; he must be ready to give up everything for the LORD.” Everything means everything. If you have a job, school, a house, money or any other material possession, commit them to GOD by prayer, so that they are not attached to your heart, so that they don’t become idols ,then make you miss the rapture.

Many Christians are internet marketers and are making a lot of money selling religious material or even ads through their Christian websites, but never did they commit these project to the Lord. It is a common oversight to do God’s work without involving Him. This is one small sin that many ignore.

2. Taking the smallest portion of that which is sin and doing it. Most often you wont realise when you take just a small portion of what it largely known as sin when it is large volumes. Stealing a paper clip is the same as stealing the whole property before God. Telling a white lie is like telling any other lie. You may tell a lie in church, in the name of Christianity, steal people’s money in the name of Christianity, it still is counted to you as sin.

I have made a list of sins, and I keep adding as I go through the Bible, at sinupdate.blogspot.com. Some of the listed sins may look unreasonable yet its not for man to dertemine what is sin and what is not but the Bible as I use it to populate the list. People simply need to obey what the Word of God says. I understand that it might take forever to list all the sins that there are but naming some referencing relevant scriptures might help. Small gossip, small greediness, small lust, etc.

Watch out for such small secrete sins, they do lead to hell when you die.

4 Responses to The smallest of sin leads to hell